-33.923776 18.423345
By: Sindy Peters
An artist in the South African music industry has plenty to contend with, such as: funding, venues, minimum support from media outlets, international counterparts taking centre stage. Sipho “Hotstix” Mabuse addressed the delegates on day one, 22 March, of the 2010 Music Exchange conference discussing why SA musicians are not resilient enough in the industry and hardly ever gain recognition and the rewards for their efforts.

Exceptions to the rule

Two years down the line, new musicians start disappearing from the South African industry according to Mabuse. Exceptions to the generalisation, however, include Prime Circle and The Parlotones which, in absentia, received resounding applause for their efforts. So what makes the circumstances of these bands different to others who certainly encountered the same obstacles in climbing the success ladder?

One of the obstacles Mabuse faced was when his band, Harari (formerly known as the Beaters), split and with his “youthful zest, passion and perseverance”, he made the choice of sticking it out and going solo. He was momentarily insecure, but managed to establish great relationships with those involved in his career and pulled through this tough patch. “It is the relationships we establish with others that determine whether the music lives longer,” says Mabuse. The moral of the story being to surround yourself with positive people who believe in you and your capabilities – people who will stand by you through those rough times when your music career looks bleak. For this, Mabuse says, he is very “grateful to the people from Gallo”.

Burn Out in the bag

During the creation of Burn Out (1985), which he describes as being given to him by his ancestors, Mabuse says the idea arrived in his head and he started playing it on the piano, creating layer after layer. It took him an hour to write, after which he called Peter Gallo, describing Gallo as “the kind of recording executive you love to have”, and said to him: “It’s in the bag.”

Artists must trust their inner creativity, but it’s equally important to be self-reliant and independent and invest in oneself: “It is important that we create our own independence in the industry. You have to first self-manage; the talent you have is your own and you share it with others,” says Mabuse. Artists need to, in the beginning stages of their careers, go out there and book their own gigs, and realise that they are running their own business and not rely on promoters – they should embrace self-employment.

Tim Lester, a musician present at day one of the conference, asked how one gets past throwing in the towel when encountering challenges. Mabuse acknowledged that these things happen and determination and the way one handles challenges determines whether one survives or not, and that you can only rely on yourself.

Mabuse, co-winner of the 2005 SAMA Lifetime Achievement Award, proposed three guiding principles for musicians to adhere to steadfastly: sacrifice, dedication and commitment. The three principles, he noted, freedom fighters for human rights used during their struggle.

For more information, go to www.musicexchange.co.za. 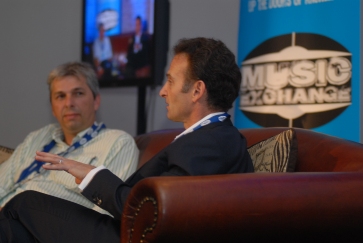 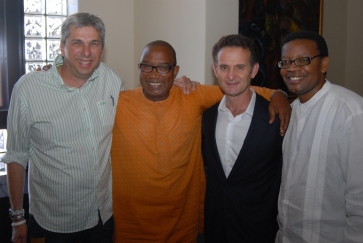 Sipho ‘Hotstix’ Mabuse has always been surrounded by music. As a child be was fasinated by the drums. At school he formed a band, called The Beaters, that eventually became the internationally renowned Harare. As a multi-instrumental solo artist he scored what must be South Africa’s first crossover hit with 1985’s ‘Burn Out’. And since his days as a pop star with afro and leather jacket, he’s reimagined himself as a recognised jazz muso, producer, music commentator, and regular performer at Nelson Mandela 46664 concerts. On 22 March he is the keynote speaker at the second Music Exchange Conference in Cape Town.

With its focus squarely on growing and celebrating the music industry and all who play there, Music Exchange is all about opening doors and welcoming dialogue around all things beat centric. Be they musicians, publishers, promoters, song writers, retailers or simple fans, this year’s conference is set to offer participants a veritable feast of opportunity to gleam insight from some of the most successful and respected players in the local and international music arenas.

Along with an already impressive line-up of guest speakers, the biggest coupe for Music Exchange founder and organiser Martin Myers is the inclusion of TouchTunes Interactive Networks Chief Executive Officer Charles Goldstuck who will deliver the conference’s keynote address.

South African born and educated, Goldstuck will be flying in from New York specifically to give the audience his vision and insight into a business that he’s suitably well qualified to speak on. Add music icon and South African Music Award Lifetime Achievement Award lariat Sipho “Hotstix”Mabuse, SAMRO Chief Executive Nick Motsatse, Jake Larsen Head of Music, Nokia Middle East and Africa, Nick Matzukis (music attorney ) and Yoel Kenan (Keevision and Africori founder )amongst others and combined the two day event and special third day workshops are all set to push the impressive boundaries set at last year’s inaugural event.

Goldstuck, a qualified charted accountant and active philanthropist is happy to have accepted the invitation to come home and offer his insights into a business he continues to help grow on a global scale. Before launching TouchTunes in the United States, he sat as the President and Chief Operating Officer of the Bertelsmann Music Group (U.S.), a then division of Sony Music Entertainment. He also, along with industry mogul Clive Davis, started J Records in 2000, home to the likes of Alicia Keys. “I’m excited to see the level of support and interest in South Africa around music in general,” he says. “Music Exchange is a rare opportunity for those invested, at whatever level, in the business of music to look, listen and share at a time when the general perception is that the music industry is in the most precarious place it’s ever been in since recorded music was first made and sold.”

Without giving away just what he intends delivering in his keynote speech on the day, Goldstuck hints at how he perceives the lay of musical land from where he sits in New York, his chosen home since 1985. Having launched TouchTunes, a web based Jukebox system now successfully deployed in over 4000 sites across North America, 2010 will take his company and the technology it employs into the Far East and Australia, leaving him upbeat about the road ahead. “I don’t share the view that the [music] industry is in perpetual trouble. I see a different scenario. Yes we’re definitely in for a few more interesting years ahead, but thereafter the trajectory upward will return,” he foretells.

Fresh from playing at The Motherland Tour at Sun City earlier this month, alongside Yvonne Chaka Chaka and Lira , Sipho Mabuse, as another of the esteemed guest speakers, will deliver the opening address. As an icon and musical ambassador for South Africa and its rich cultural heritage Mabuse is keen to see music lovers unite in injecting new direction into a market that can only grow from the Music Exchange initiative. “In 2011 I celebrate my 50th year as a professional musician,” Mabuse informs. “I owe a great deal to the place that afforded me a career to this day and that’s taken me all over the world. Music continues to give me joy great joy that’s only equalled by that which family offers.”

“Music is a gift,” Goldstuck adds. “As such it’s all in how it’s delivered and just how desirable and great the songs are.” An echoed sentiment first delivered by last year’s keynote address by Stuart Rubin. “That will continue to see fans happily spending their recessionary rands on product they attach a real value to.”

As Steve Jobs grows his Apple orchard and iPads, iPhones and the digital domain in general continues to mature at a rate of knots, the business of music and the makers of hot hit singles need to adapt to the technology that’s captivating and cultivating new audiences everywhere. “In 2001 iTunes did not exist,” Goldstuck points out. “There was no commercially viable digital or e-commerce model at all. And yet, in under a decade, it’s responsible for of a billion legitimate downloads – bought and paid for by the fans. There is so much real opportunity out there right now, not only for artists and music lovers, but for the broader business, to become more involved in capitalising on mobile’s extraordinary take up in this market. Couple that with the impending arrival of true broadband in South Africa and you’ve got a tried a tested formula that simply needs to be replicated. If not by the major record companies then a smart forward thinking independent.”

Add the likes of audio streaming giants Pandora in the US and Spotify in the UK and Europe and the true potential of music penetration into the 14-million-strong South African mobile market becomes a very healthy proposition for any venture capitalist keen to see a return on his or her investment. “Consumption will escalate,” Goldstuck enthuses. “With that comes the opportunity for band and business alike to monetize the medium to the collective good of maker and lover of what’s on sale. This will perpetuate the continued creation of fresh, original music that the world is clearly keen to spend money on – especially of you all the traditional barriers no longer exist.”

In line with the digital theme delegates will also have the opportunity to upload their demo material on www.musicexchange.co.za. Their tracks will then be published, in streaming format. along with a band photograph and biography, giving fledgling artists exposure to the industry experts.

Goldstuck, as with Myers, along with Larsen, Lacey, Kenan and “Hotstix” are all singing off the same choir sheet. From last years sold-out conference it’s clear that the cliché ‘you don’t choose music, it chooses you’, couldn’t ring more true for each and every one of these pioneers who, note-for-note are rewriting the great South African songbook.

Tickets cost R900 and are available online at: www.webtickets.co.za

Working with you and Sipho and the whole team was great. I am humbled and thankful.

once again thank you for your support.

Cape Town, 3 March 2010: In line with the digital theme for this year’s Music Exchange, delegates attending the conference will have the opportunity to upload their demo material on www.musicexchange.co.za. Their tracks will be published in streaming format along with a band photograph and biography, giving them exposure to many industry experts and fellow colleagues in the music industry.

Last year bands were selected to perform at a showcase, however this year, this year up to 18 tracks will be hand picked and made available for download in MP3 format in a digital compilation entitled “The Best of Music Exchange 2010.” The qualifying performing artists will be announced on the last day of the 2-day conference on 23 March 2010.

Artists are requested to upload their demos together with a photograph and a short biography no later than Thursday 18 March 2010. Only paying delegates will qualify to be featured on the Website in streaming format and on the MP3 compilation. Demos can be submitted via the Soundcloud drop box on the Music Exchange web page or directly on http://soundcloud.com/musicexchange/dropbox

Music Exchange is South Africa’s first independent music conference and will be held on 22 and 23 March 2010 at Protea Hotel Victoria Junction in Cape Town.

Tickets are available for R900 for both days through www.webtickets.co.za. Requests for media accreditation must be made through Tim Hill, tim@musicexchange.co.za.