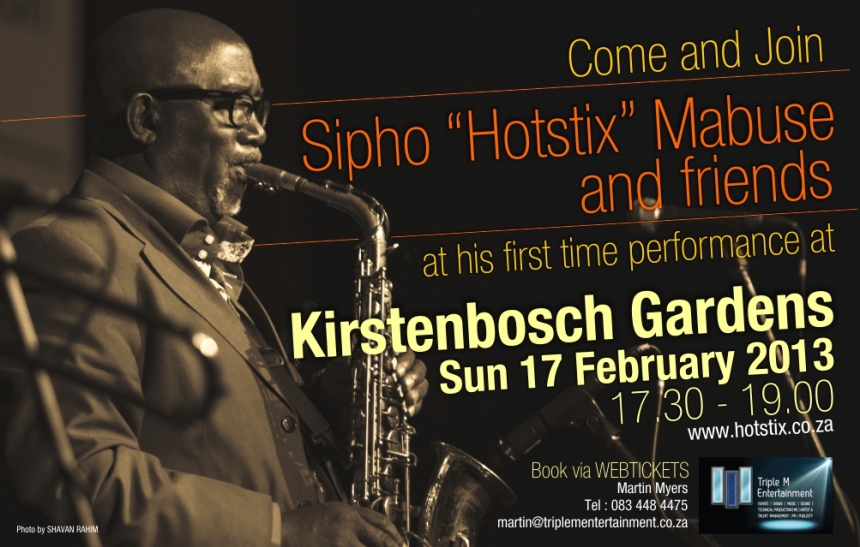 Triple M Entertainment has secured Steve Louw and Big Sky who were the support act for the 1998 Rodriguez tour of SA (they feature in the acclaimed movie “Searching for Sugar Man”).

The band play De Waal Park this Sunday 3rd Feb. – Special guest is Mark Haze, who Steve saw perform earlier this season at De Waal Park and remarked that it would be great for Mark to come and guest with his band on the show this Sunday at 4pm.

“Mark has a great voice and it would be fun to play with a young star at a venue that lends itself to doing great collaborations on stage.” 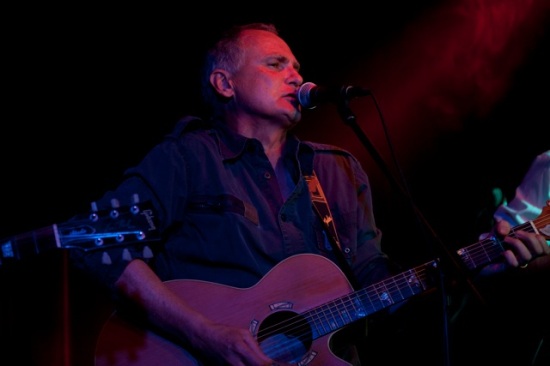 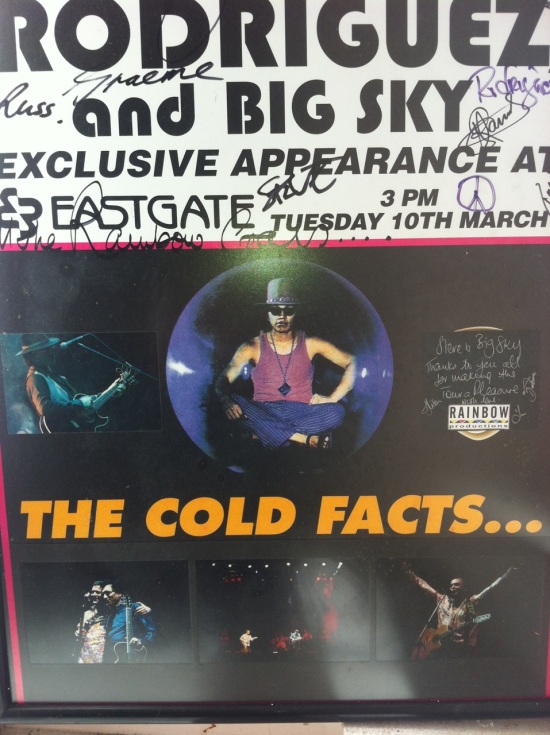 ONE interesting aspect of the African Nations Cup is how it profiles not only South African sport, but our culture, via its opening and closing ceremonies. Though torrential rain truncated Saturday’s opening, we saw enough to raise sharp questions about choices made in 2010, which shoved South African sounds to the margins.

Sipho “Hotstix” Mabuse has been heating up rain-sodden stadium shows since his teens.

He did it again on Saturday with Shikiza: an old song but a very good one that had the whole crowd dancing, rainstorms or no. Perhaps they simply wrote more infectious songs back in the 1980s; more likely, the song had a greater effect in contrast to the formulaic flaccidity of the composed-by-the-yard corporate muzak that surrounded it. 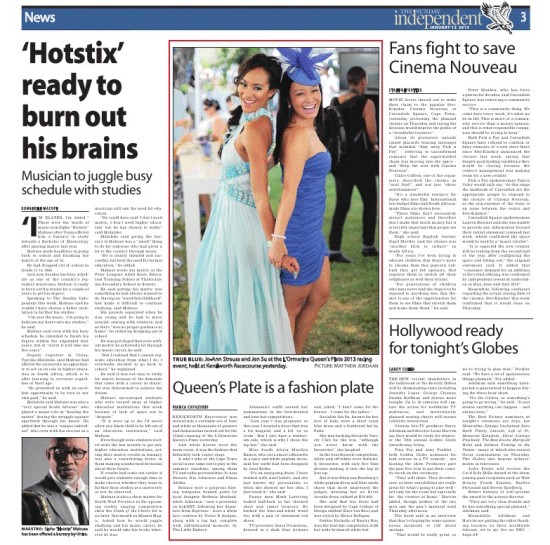 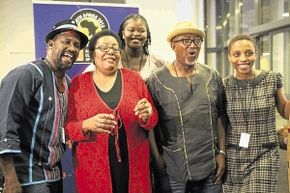 PROUD: Ringo Madlingozi, Sibongile Khumalo, Siphokazi Mohapi, Sipho Mabuse and Ayanda Nhlangothi are some of the artists to perform at the Africa Cup of Nations at the National Stadium in Soweto, Johannesburg. PHOTO MOHAU MOFOKENG

AFRICA’s biggest soccer spectacle, the Africa Cup of Nations (Afcon), will open with a star studded artist line-up on Saturday.

One of the performers is heavily pregnant afro-pop singer Siphokazi Mohapi who says though she has little knowledge of soccer, she is honoured to be part of the line-up.

“I am going to perform as a soloist and then as part of the group of artists at the end of the opening ceremony. The song is titled Sisebenzela and it was composed by Mam Sibongile Khumalo.

via Artists ready to stun at the Afcon opening – Sowetan LIVE. 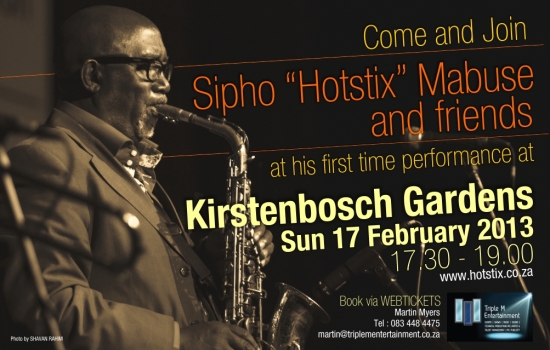 Following the success of the inaugural De Waal Park Summer Concerts in 2011/2012 the Friends of De Waal Park and Re/MAX Living and Triple M Entertainment are once again going to bring great music to the Park in Oranjezicht for 2013 .

Jimmy Dludlu, The Rudimentals, Mark Haze, Robin Levetan, Saudiq Kahn, Karen Zoid, have all performed so far in the 2012/ 2013 series and next up

The musical style of the band is rooted in Jazz, but covers various genres of music styles. The band is flexible in that it moves from the blues to swing and from bebop to modern jazz and is spiced with a Latin flavour. A unique formula, which this band has encompassed, is the introduction of Gospel Jazz as a part of their repertoire.

The Glenn Robertson Jazz Band released their latest album “On your Feet” in March 2009.

Michelle Robertson released her debut album “A Love That Will Last” in December 2010.

The band has been a part of the Cape Town International Jazz Festival in 2010 and did 2 concerts in Sydney and Melbourne Australia in 2011 besides local events. 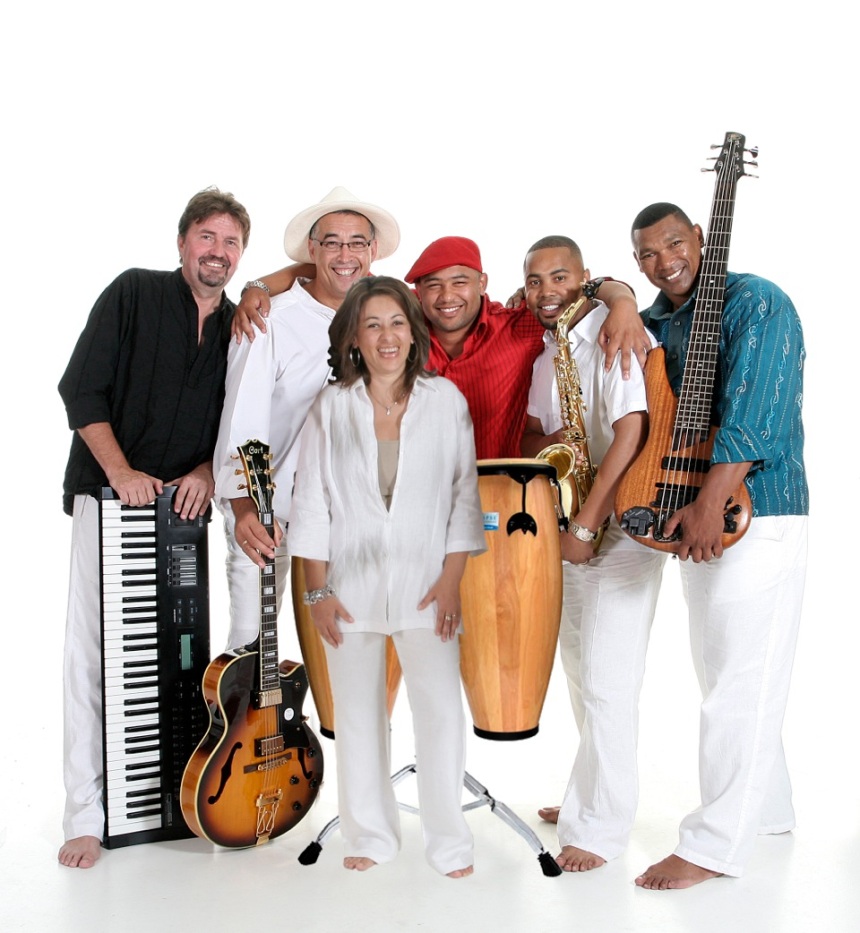 The concerts are being held on Sunday afternoons in order to be as accessible as possible for the local community, and ensuring that parents with younger children have the opportunity to attend too. Dog are always welcome.

The Summer Concerts will be staged in the original Edwardian bandstand which was manufactured by Messrs Walter McFarlane & Co of Glasgow and presented to ‘the corporation’ in Cape Town by the Traders-Market & Exhibition Ltd. London in 1904. It was moved from the original exhibition space in Green Point to De Waal Park some years later.

With everyone having his say about matric, I did mine last year, please read why and maybe it will inspire the 2013 class – Sipho ” Hotstix” Mabuse 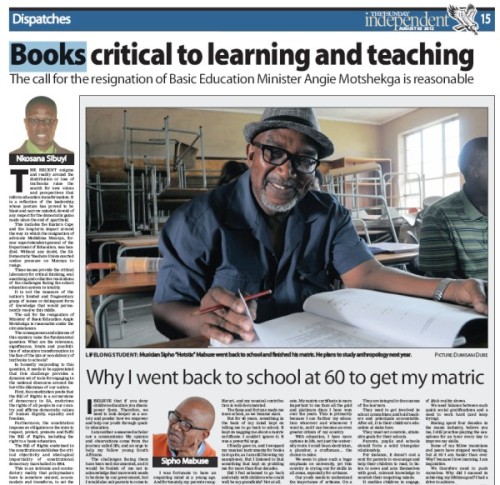 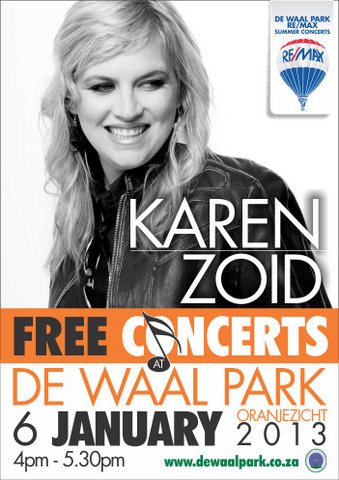