The day to diarise is Saturday 27 September. That’s when the “Perfect mood”, “Feel for life”, “Inside ’n out” and “Love is in the house” hit maker, along with his five-piece band, will take to The Nassau Centre’s stage on Palmyra Road in Newlands.

The theme of the Multi-talented, Singer/Songwriter, Lifestyle Coach and Inspirational Speaker’s concert is all about taking some time out, to celebrate the gift of life. To reflect on all that we have to be grateful for in our lives right now. “It’s so easy to get caught up in what’s wrong with our lives and the world right now,” Roeshdien says. “Granted, that needs to be acknowledged. There are equally as many things to be grateful for. This special evening is an invitation to everyone, and anyone, to join the amazing Siphokazi Jonas and I, in The Gratitude Café.”

Inspired by a group that Roeshdien and a friend started on Facebook, The Gratitude Café, which has subsequently, evolved into a show that will play out a fusion of Jazz, Soul, Funk, Reggae and Spoken word/Poetry come 27 September 2014. The entire show promises patrons music, lyrics, socially conscious, with a commercial appeal. “It’s a show where like-minded people can connect and share the things that they are grateful for in their lives right now,” Roeshdien explains. “I will be performing all my popular radio singles and also pay special tribute to some of my biggest inspirations. Picture this…the spirit of Sir Francis Albert Sinatra, Robert Nesta Marley, Sergio Mendes, Jamiroquai, Brendan Adams to name a few, all in the same space for one night only.”

Add a remarkable opening act Siphokazi Jonas, a member of the Exodus Klan Poetry Collective, to the night’s proceedings and patrons can look forward to some socially conscious poetry. In June this year she shared the stage with two well-known American poets, Janette…Ikz and Ezekiel, on the Cape Town leg of their South African tour. Siphokazi is also part of the ‘Cape Town Collaborative’, established by the ‘Epiphany Band’, a collaboration consisting of five vocalists and two poets who recently released the women’s day song and video, “I am woman”. 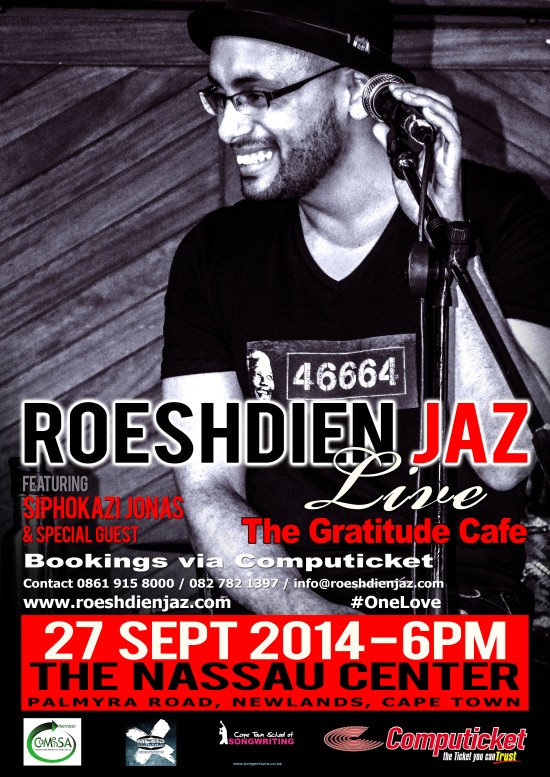 Look out for the launch of the ‘Roeshdien Jaz’, new look website (www.roeshdienjaz.com), special prizes up for grabs, and the official worldwide digital release of his two popular radio singles, “Inside n out” and “Love is in the house”. (iTunes, Amazon etc.). Three of his songs have just been confirmed to be used in the popular South African weekday soapie, Isidingo. Add the promise of a full debut album to be released in the Summer 2014, and of course the much anticipated, ‘Roeshdien Jaz Live, ‘The Gratitude Café’ concert, is sure to be a night to remember…#Uplift&Inspire

Concert tickets go live on the 22 August 2014 at 9am. Early bird booking discount price of R130 up until the 31 August. Thereafter a normal price of R150 applies, all via Computicket. The MC for the evening is no other than The Distinguished Gentleman, Andre Solomon.

The month of August is dedicated to all women in South Africa.  In celebration of Woman’s Month, Cape Town Collaborative have put together a special track  titled “I Am Woman”.

It available as a free download, on their Reverbnation Page – http://www.reverbnation.com/epiphanybandsa

Valentino van der Schyff and Tina Gordon are a male and female duo called Epiphany, who have put together a project called  The Cape Town Collaborative.

Epiphany have always wanted to write a song in honour of women and decided to get in touch with artists they met at Music Exchange this year.

Tina recalls writing the song: “I wanted to write a song about women I admire and women others look up to.

It needed to be a powerful showing and an ode to all women of strength.  We attended an open mic event at Liquid Lime Studios hosted by PANSA, after receiving an invitation from Natalia Da Rocha.   It was at that moment we realised that we just had to complete the dedication to women in a composition we had in mind for so long.

Valentino explains:  “After attending Music Exchange in March 2014, I was taken aback by the valuable information gained and realised how much we still need to do in the South African music business.  Music Exchange has taught me so much and I’ve shared all of the knowledge gained with my partner in crime – Tina!  We got right into it.  Kept recording originals, kept writing songs, kept doing every single gig we possibly could.  After Music Exchange, my mind set has shifted and we have never looked back since.”

Future Projects – Epiphany are already onto their next track titled “My Favourite” which will definitely be released before the end of September, if not sooner!  For now, it is all about women and their Cape Town Collaborative tribute!

The 22-year-old who hails from Usakos is a student at the University of Namibia. Triple M was responsible for all the audio content of the show as well as booking the guest performer the fantastic RJ Benjamin. 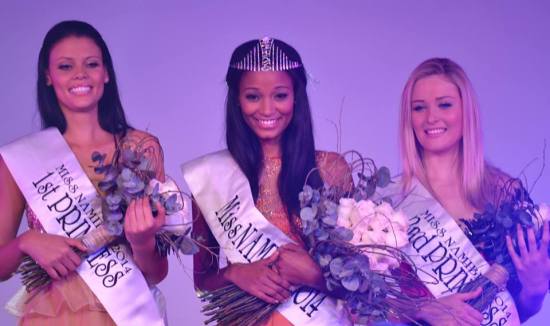 From: RJ Benjamin
Subject: Miss Namibia
Date: 04 August 2014 11:46:57 AM SAST
To: Martin Myers
Hey Mart
Thanks again for a great weekend and the opportunity to perform at Miss Namibia.
Keep it Soulful…
RJ Benjamin